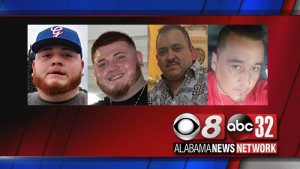 The Chilton County Sheriff’s Office needs your help finding men who they think may have evidence in the case of the three burned bodies that were found last month. The bodies were found in a burned-out vehicle on a remote logging road.

The sheriff’s office says the men are missing persons from an agency in Tennessee. They were said to be headed to Alabama for a job. They don’t know if the men were traveling together or by themselves.

The sheriff’s office thinks the men and the vehicles are key pieces of evidence in the case of the burned bodies. The bodies were found in the vehicle off of Highway 155 on County Road 969.

If you have any information regarding these men or vehicles, contact the Chilton County Sheriff’s Office at (205) 755-4698.