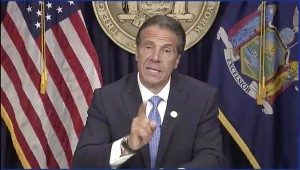 New York Gov. Andrew Cuomo speaks during a news conference to announce his resignation. (Office of the Governor of New York via AP)

Gov. Andrew Cuomo (D-New York) says he will resign over a barrage of sexual harassment allegations in a fall from grace a year after he was widely hailed nationally for his detailed daily briefings and leadership during the darkest days of COVID-19.

The three-term Democratic governor’s decision, which will take effect in two weeks, was announced today as momentum built in the New York Legislature to remove him by impeachment.

It came after New York’s attorney general released the results of an investigation that found Cuomo sexually harassed at least 11 women. Cuomo called some of the allegations fabricated and forcefully denying he touched anyone inappropriately. 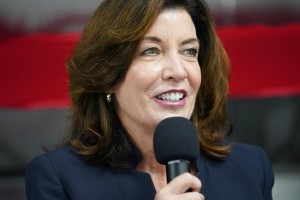 The centrist Democrat from western New York last week joined the chorus of politicians denouncing the governor. She said today that she’s ready to lead.

White House press secretary Jen Psaki said that President Biden did not speak with Cuomo before his resignation and Cuomo did not give the administration advance notice.

Biden and Cuomo were once close allies. But the president called for Cuomo to step down last week in response to an independent investigations’ findings.

Psaki said that Biden has yet to speak to Kathy Hochul. But Psaki added that the administration looks forward to working with her.

US added a strong 517,000 jobs in January despite Fed hike

Tom Brady has announced his retirement. This time he says "it's for good."