The first day of school at Dallas County High School — was marred by a student bringing a gun to school.

Deputies were called out to the school Monday afternoon — after school officials got a tip — that a student had a gun on campus. 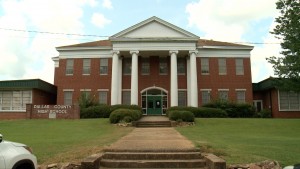 “Before we responded, the principal was able to locate a book bag in which the gun was located, said Granthum.

“It was in a classroom. It wasn’t a student around at the time.”

“We immediately took that subject into custody and began questioning. The school was placed on immediate lock down which the Dallas County High School administration did an excellent job as far as making sure every child was safe. There was never a child in danger during that time.”

Granthum says teen has been placed in juvenile detention — and an investigation is underway.

“The first day of school, we don’t know if something happened during the summer time but he felt threatened by another student or retaliation? We really don’t know at this this time. But it’s being investigated.”

Superintendent Hattie Shelton says no weapons of any kind are permitted on school property.

She says any disciplinary action taken by the school district — will be based on the recommendation of the principal.