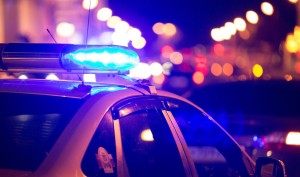 The Alabama Law Enforcement Agency (ALEA) says the driver has been identified as 29 year old, Joshua Wesley Sweatman, of Georgia. The chase happened at approximately  9:07 p.m. on Tuesday.

The car he was driving was a Chevrolet Cruz, the chase ended when Sweatman crashed the Chevrolet Cruz into a guardrail and a light pole at the intersection of Interstate 85 and the Eastern Bypass in Montgomery.

As briefly mentioned in the original story, Sweatman barricaded himself in the car, he refused to negotiate with the troopers which resulted in the hour-long stand-off. He was eventually taken into custody and transported to a hospital for his injuries.

After further investigation, it has been revealed that the vehicle Sweatman was driving was stolen out of Coweta County, Ga. He faces multiple charges including Attempting to Elude, Resisting Arrest, Drug Paraphernalia, Receiving Stolen Property First-Degree, and several traffic violations in Lee, Macon and Montgomery counties.

There is no further information regarding this incident. Stay with Alabama News Network as the rest of this story unfolds.

The Alabama Law Enforcement Agency (ALEA) says troopers were involved in a highspeed chase Tuesday evening. The chase started in Macon County and ended in Montgomery on Interstate 85, near exit 6.

The pursuit began after the driver refused to stop when troopers attempted to pull the vehicle over for speeding. The chase ended when the driver crashed the vehicle and wasn’t able to drive any further.

Troopers were able to then barricade the vehicle as they negotiated with the driver. As of Tuesday night, the driver is in custody.

There is no further information regarding this incident. Stay with Alabama News Network as the rest of this story unfolds.