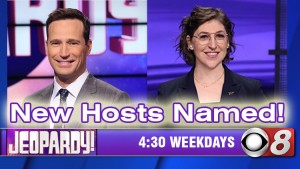 Sony Pictures Television has named Mike Richards and Mayim Bialik as hosts of the legendary hit game show “Jeopardy!”. The show can been seen weekdays at 4:30 p.m. on CBS 8.

Richards will become the host of the daily show when Season 38 begins on September 13, while Bialik will host primetime series and new spinoffs, including the upcoming “Jeopardy! National College Championship” that will air on ABC 32 next year.

“We are thrilled to begin the next chapter of America’s favorite quiz show with Mike hosting our daily show and Mayim hosting new versions of Jeopardy!,” said Ravi Ahuja, Chairman of Global Television Studios and Corporate Development for Sony Pictures. “We took this decision incredibly seriously. A tremendous amount of work and deliberation has gone into it, perhaps more than has ever gone into the selection of hosts for a show – deservedly so because it’s Jeopardy! and we are following the incomparable Alex Trebek. A senior group of Sony Pictures Television executives pored over footage from every episode, reviewed research from multiple panels and focus groups, and got valuable input from our key partners and Jeopardy! viewers.”

Richards will continue as executive producer.

“I am deeply honored to have the opportunity to host the syndicated version of Jeopardy!,” said Richards. “Never in my wildest dreams could I have imagined being chosen to step into a role of this magnitude. I am incredibly humbled to step behind the lectern and will work tirelessly to make sure our brilliant contestants shine in each and every episode. Alex believed the game itself and the contestants are the most important aspects of the show. I was fortunate to witness his professionalism, intensity and kindness up close and that will serve as the ultimate blueprint as we continue to produce the show we love. I am thrilled that Mayim is joining the Jeopardy! team. Her academic track record and enthusiasm for the game made her a terrific guest host. It will be a privilege to produce the primetime series with her as host.”

“I couldn’t be more thrilled to join the Jeopardy! family,” Bialik said. “What started out with my 15-year-old repeating a rumor from Instagram that I should guest host the show has turned into one of the most exciting and surreal opportunities of my life! I’m so grateful and excited to continue to work with Mike Richards, and I’m just over the moon to join forces with him and Sony. After all the conversations we’ve had about this partnership, I am just so ready to get started!”

Mike Richards signed a multi-year overall deal with Sony Pictures in 2019. Prior to that, he served as executive producer of The Price Is Right for 11 years. A four-time Daytime Emmy® Award winner and 19-time nominee, Richards also served as executive producer of Let’s Make a Deal and has produced over 4,000 hours of game show programming. Richards is also known for his work in front of the camera, having hosted five series including Beauty and the Geek, Game Show Network’s 2016-17 version of Divided and the 2012 revival of The Pyramid.

Mayim Bialik is an acclaimed actress, author, host, and neuroscientist, well known for her award-winning role as Amy Farrah Fowler on the hit CBS comedy, The Big Bang Theory. Currently, Bialik is starring in Call Me Kat on Fox, which she also executive produces. Outside of the realm of television, she also is the host of the mental health podcast “Mayim Bialik’s Breakdown” and she recently wrote and directed her first feature film, As Sick As They Made Us, starring Dustin Hoffman and Candice Bergen.

Longtime “Jeopardy!” host Alex Trebek died in November after battling pancreatic cancer for nearly two years. He was 80. After original episodes with Trebek aired, the show has used a series of temporary hosts while the search was conducted.