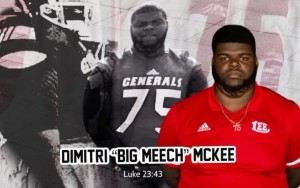 The Alabama High School Athletic Association has released a statement this morning regarding the death of Lee High School football player Dimitri McKee. He died Friday.

The AHSAA says it’s saddened to learn of the death.

“Our heartfelt condolences go out to the McKee family and to Dimitri’s coaches and teammates at Lee High School, its faculty and student body for their tragic loss,” said AHSAA Executive Director Alvin Briggs. “We offer our deepest sympathies and pray God will sustain each of them in this time of such great sadness.”

According to MaxPreps, McKee was 6’3″ and played on the offensive line.

Ann Street faithful , with a heavy heart the Generals announce the passing of another member of the Fami-Lee. Dimitri “BIG MEECH” McKee has joined Lee’s players and leaders now looking over Ann Street. Please keep his family, teammates and Coaches in your thoughts and prayers. pic.twitter.com/wAyMnptz6g