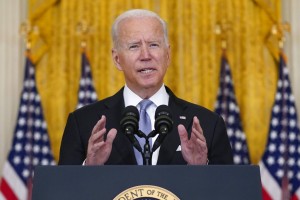 President Joe Biden says he stands “squarely behind” his decision for the U.S. to leave Afghanistan.

Speaking about the chaotic situation in Kabul, Biden says he faced a choice between following an agreement to withdraw or sending thousands more U.S. troops for a “third decade” of war.

Biden spoke this afternoon after the planned withdrawal of American forces turned deadly at Kabul’s airport as thousands tried to flee following the Taliban’s swift takeover of the country.

Biden returned to the White House from the Camp David presidential retreat to deliver his first public remarks on the situation in nearly a week.