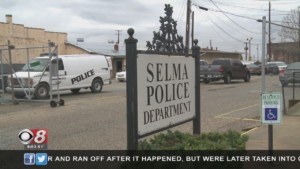 A judge has dismissed charges against three one-time Selma police officers arrested during a probe into guns that were missing from an evidence room.

Circuit Judge John Bush threw out the cases today at the request of the state attorney general’s office.

The one-time officers were charged with making false statements. But a local prosecutor says the cases were weak, and other cases can now move ahead because of the decision.

The three were charged in 2018. Authorities opened an investigation of the Selma Police Department after a large number of guns were taken, including one later connected to a homicide.