The Alabama Democratic Party has confirmed that State Representative Thad McClammy of Montgomery has passed away. 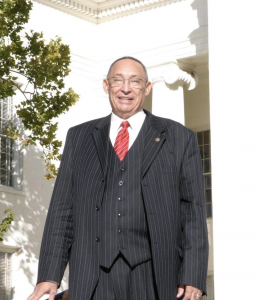 McClammy represented Alabama’s 76th District since 1994. He was a ranking member on the House Judiciary Committee and served as chairman of the Montgomery County Legislation Committee and the Alabama House of Representatives Public Safety Committee.

He was born on October 22, 1942, received his M.S. in Vocational and Adult Education from Auburn University at Montgomery, and an Honorary Doctor of Laws Degree from Selma University.

Representative McClammy was a real estate broker and developer and as the national financial secretary for Tots & Teens, Inc.

Representative McClammy was a member of the Omega Psi Phi Fraternity and Iota Lambda Sigma Fraternity. Rep. McClammy was chairman of the House Public Safety Committee.

He is survived by two children, Patrice and Christopher.

He also served as President of Trenholm State Community College for 14 years.

Gov. Kay Ivey has ordered flags to fly at half-staff through Sunday in his memory.

I’m directing flags be flown at half-staff to honor Rep. Thad McClammy, who passed away earlier today. On behalf of the state of Alabama & my colleagues in the legislature, I offer my deepest sympathies & prayers to Thad’s loved ones & his constituents. https://t.co/0EB0kW7DDG