Trump: “Joe Biden Was Going on Vacation as Afghanistan Was Going to Hell” 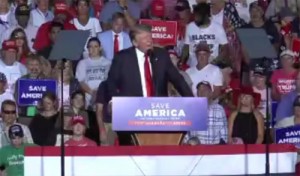 Former President Donald Trump spoke at an outdoor rally in Cullman Saturday night, rebuking the Biden administration on a host of issues, from the economy to Afghanistan, in a speech that lasted about 90 minutes.

The rally was hosted by the Alabama Republican Party and was held at York Family Farms.

Trump went on stage to “God Bless the U.S.A.” by Lee Greenwood, as he tossed a stack of his signature red ball caps into the crowd. He spoke about the size of the crowd, and admonished the press for not showing it on camera.

After saying, “We did have a rigged election,” referring to his 2020 re-election defeat, he looked ahead to 2022, telling the audience, “With your help, we’re going to elect Mo Brooks,” who spoke immediately before the president and who is running to replace the retiring U.S. Sen. Richard Shelby in next year’s election.

STEVE FLOWERS ANALYSIS: TRUMP MAY BE RUNNING FOR PRESIDENT IN 2024

Trump then spoke about President Biden’s seven months in the White House. Trump said he had predicted last year that a Biden presidency would have disastrous consequences in several areas, but he focused much of his time om stage on Afghanistan.

“Joe Biden was going on vacation as Afghanistan was going to Hell,” Trump said. He says recent events are the greatest foreign policy humiliation in the history of the U.S. Trump said when the country marks the 20th anniversary of the 9/11 terrorist attacks, a Taliban flag will be flying over the U.S. embassy and over other U.S. facilities in Afghanistan.

Trump spoke of other issues, including the “woke” culture.

“Everything  woke turns to sh*t,” he said to cheers from the crowd and chants of “U.S.A.”

Trump also talked about the ongoing fight against coronavirus, saying that his administration developed three vaccines in just under three months.

“I recommend ‘take the vaccine,'” he said, while also saying that people have their freedoms. He reminded the crowd that he has received the vaccine.

Other topics in Trump’s speech included border security, the economy, crime and the military.

Before the event, it was estimated that the crowd could be in the tens of thousands. A crowd estimate has not been announced.

The Alabama Democratic Party issued a response to the Trump rally, saying:

“Instead of finding solutions to our COVID crisis, improving worker wages and conditions, and expanding healthcare for Alabamians, the political leaders of the Alabama Republican Party spent their Saturday worshipping former President Trump while he continued to spew lies about the 2020 election.

Donald Trump’s legacy is one of sowing division, amplifying conspiracy theories about COVID, trying to overturn a fair election, and increasing our national debt with massive tax breaks for millionaires and billionaires.

While the Alabama Republican leaders are in Cullman with Trump, Alabama ICUs are full and we are still nearly last in healthcare, education, and vaccinations. We need to increase the minimum wage to $15 so that folks only have to work one job. We need to legalize cannabis to build new economic opportunities and release folks who are in jail for weed. We need to accept federal funds to expand medicaid to give healthcare to thousands of Alabamians. We’re tired of being last in everything after a decade of Republican control. We need change in Alabama.”