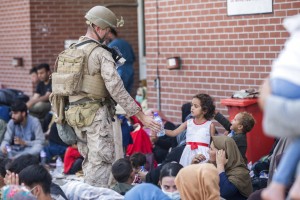 President Joe Biden says the U.S.-led evacuation of Americans, at-risk Afghans and others from the Kabul airport has picked up speed this weekend.

Speaking at the White House on Sunday, Biden said 11,000 evacuees had been airlifted out of the Afghan capital in a 36-hour period. He also said that no Afghan evacuees are being flown directly to the United States without prior screening.

Tens of thousands of people remain to join the airlift, which has been slowed by security issues and U.S. bureaucracy hurdles. The Pentagon has ordered six U.S. commercial airlines to help move evacuees from temporary sites outside of Afghanistan.

President Biden is raising concerns that the Islamic State poses a threat as American troops seek to evacuate thousands of U.S. citizens and Afghan allies from Afghanistan. Biden noted that the terror group is a “sworn enemy of the Taliban” and said that the longer U.S. troops are on the ground increases the chance that the group will attempt to strike innocent civilians and American personnel near the Hamid Karzai International Airport.

The U.S. Embassy in Kabul has been warning Americans to avoid traveling to the airport in part because of concerns about Islamic State fighters. The extremist group has long declared a desire to attack America and U.S. interests abroad and it has been active in Afghanistan for a number of years.

The group has been repeatedly targeted by U.S. airstrikes in recent years, and faced Taliban attacks.