The City of Wetumpka started off a week of celebrations for a very special director who put the city in the spotlight back in 2003 with his popular film, “Big Fish.” 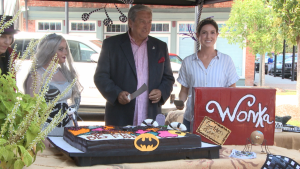 Wetumpka is celebrating Director Tim Burton in a week long event. The event kicked off with cutting an extravagant cake for Tim Burton’s birthday. The city is covered in pop culture references to his 40+ movies that he has made during his career. Wetumpka residents dressed as their favorite characters this afternoon in honor of Tim Burton’s 63rd birthday.

Tim Burton Week organizer, Lucky Lawrence, is really excited for people to celebrate the director this week,  “Wetumpka’s really well known for ‘Big Fish’ which was the movie that was, ya know, inspired by Tim Burton — directed, produced — and most folks don’t know that that he’s done over 40 other movies as well as his own expressionism art that’s been seen worldwide. So, we want to highlight him and all that he’s done for the world to bring smiles in as many awkward ways as possible, right! ”

Numerous establishments will offer special food and drink menu items named after Tim Burton’s films and characters. The week will close out Saturday with an all day screening of “Big Fish.”