The city of Selma has implemented a new city-wide mask mandate — in an effort to fight the spread of COVID-19. 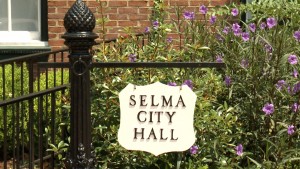 The ordinance requires people in Selma — to wear a mask in public places — which are defined as any place other than an individual’s home or personal vehicle.

“Indoors or outdoors where social distancing is not possible. And where transmission is more likely,” said City Attorney Major Madison, Jr.

City officials say the ordinance is in response to a surge in COVID-19 cases — and the Delta variant. And the intent of the ordinance — is to mitigate the spread of the virus — and to protect the public.

So, I asked the public — what they think about the mandate.

“All people in Selma should wear a mask. It’s good for us,” said Duke Mathieu.

“Yeah. I feel like everybody need to where a mask because this stuff ain’t no joke. It’s serious,” said Marvin Maul.

“I think it will help to bring the Delta variant of the virus under control. The numbers are surging now in our community — and the deaths are also on the rise as well,” said Curtis Johnson.

The ordinance will remain in effect until November 1st.

ADPH: COVID-19 Cases in Alabama Schools Fall to Near 400

WATCH: Biden Says New COVID-19 Variant a Cause for Concern, Not Panic