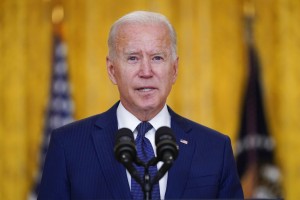 President Joe Biden speaks about the bombings at the Kabul airport that killed at least 12 U.S. service members, from the East Room of the White House, Thursday, Aug. 26, 2021, in Washington. (AP Photo/Evan Vucci)

President Joe Biden says the United States will complete its evacuation of Americans and others from Kabul, despite the attack that killed 13 U.S. service members and many Afghan civilians.

He vowed to avenge the deaths, saying the U.S. has some idea of who perpetrated the attacks and will hunt them down.

A U.S. official said the attack was believed to have been carried out by the Islamic State group.

Continuing the evacuation means Biden risks more deaths, but the alternative would be an early end to the pullout and leaving behind Americans still seeking to leave the country.

Two suicide bombers and gunmen targeted crowds of Afghans flocking to Kabul’s airport to flee the Taliban takeover of Afghanistan. An Afghan official says at least 60 Afghans were also killed and 143 wounded.