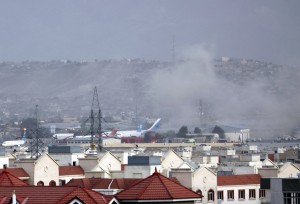 Smoke rises from explosion outside the airport in Kabul, Afghanistan, Thursday, Aug. 26, 2021. The explosion went off outside Kabul’s airport, where thousands of people have flocked as they try to flee the Taliban takeover of Afghanistan.  (AP Photo/Wali Sabawoon)

U.S. officials say 12 U.S. service members were killed, including 11 Marines and a Navy medic in an attack in Kabul, Afghanistan.

An estimated 15 other American military members were among dozens wounded in the explosions.

Pentagon spokesman John Kirby says one was near an airport entrance and another was a short distance away by a hotel.

U.S. officials believe ISIS is responsible for the attacks.

Kirby says, “We can confirm that the explosion at the Abbey Gate was the result of a complex attack that resulted in a number of US & civilian casualties. We can also confirm at least one other explosion at or near the Baron Hotel, a short distance from Abbey Gate.”

Statement on this morning’s attack at #HKIA: pic.twitter.com/Qb1DIAJQJU