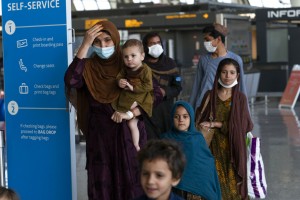 Families evacuated from Kabul, Afghanistan, walk through the terminal before boarding a bus after they arrived at Washington Dulles International Airport, in Chantilly, Va., on Friday, Aug. 27, 2021. (AP Photo/Jose Luis Magana)

American forces working under heightened security and the threat of another attack are racing to complete the evacuation from Kabul’s airport, the day after a suicide bombing at the gates wrote a devastating final chapter to the war in Afghanistan.

The death toll has risen to 169 Afghans, a number that could increase as authorities examine fragmented remains, and 13 American service members.

The White House and the Pentagon warn there could be more bloodshed ahead of President Joe Biden’s fast-approaching deadline Tuesday to end the airlift and withdraw American forces.

Biden’s promise to strike the extremists behind the attack now confronts the reality of finding and targeting them in an unstable country without U.S. military and intelligence teams on the ground.

Biden was warned Friday to expect another lethal attack in the closing days of a U.S.-led evacuation.