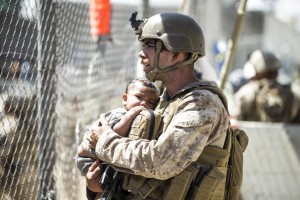 President Joe Biden is warning that it’s “highly likely” an Islamic State affiliate will try another attack in Afghanistan.

The State Department has urged all American citizens to leave the vicinity of Kabul’s airport immediately, citing in its early morning warning a specific, credible threat.

Biden has vowed to expand a U.S. air campaign against the Islamic extremist group whose suicide bomb attack at the airport last Thursday killed scores of Afghans and 13 American service members.

The Pentagon said the remaining contingent of U.S. forces at the airport, now numbering fewer than 4,000, had begun its final withdrawal ahead of Biden’s deadline for ending the evacuation on Tuesday.

The remains of the 13 fallen American service members have begun their journey home.