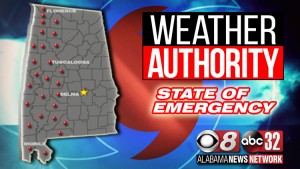 Alabama counties in the state of emergency – Click to enlarge

Governor Kay Ivey declared a state of emergency for 27 of Alabama’s 67 counties.

Several counties are expected to face the threat of strong winds, flooding, and tornadoes due to Hurricane Ida.

The emergency went into effect at 2 p.m. Saturday. All coastal and western counties are included in the order. In our area, that includes Clarke, Conecuh, Dallas, Greene, Hale, Marengo, Monroe, Perry and Wilcox counties.

The state of emergency is generally for areas west of Interstate 65, including cities such as Florence, Tuscaloosa, Demopolis, Selma and Mobile. Other cities, such as Huntsville, Birmingham, Montgomery, Auburn and Dothan are not included in the state of emergency.

This weather event is expected to cause significant damage to public and private property, and to disrupt essential services like water and power.