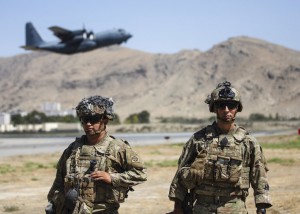 In this image provided by the Department of Defense, two paratroopers assigned to the 1st Brigade Combat Team, 82nd Airborne Division conduct security while a C-130 Hercules takes off during a evacuation operation in Kabul, Afghanistan, Wednesday, Aug. 25, 2021. (Department of Defense via AP)

The United States military struck back at the Islamic State in Afghanistan on Saturday, acting on President Joe Biden’s vow to hit the extremists in retaliation for a suicide bombing claimed by IS that killed as many as 169 Afghans and 13 American service members at Kabul airport Thursday.

A U.S. Central Command statement said a drone strike targeted an IS planner in the eastern province of Nangarhar.

It said initial indications were that the target was killed. Biden said Thursday he would strike back at the Islamic State group’s Afghanistan affiliate. “We will hunt you down and make you pay,” he said.