Hurricane Ida made landfall at 11:55 AM CDT Sunday at Port Fourchon, Louisiana as a powerful and destructive category 4 hurricane with winds of 150 mph. The system is weakening as it continues inland and early this morning Ida weakened into a Tropical Storm as the center of circulation moves north into South Mississippi. However, the system remains a serious threat to life and property with flooding rains, tornadoes, and gusty winds, and these threats are heading towards Alabama today. 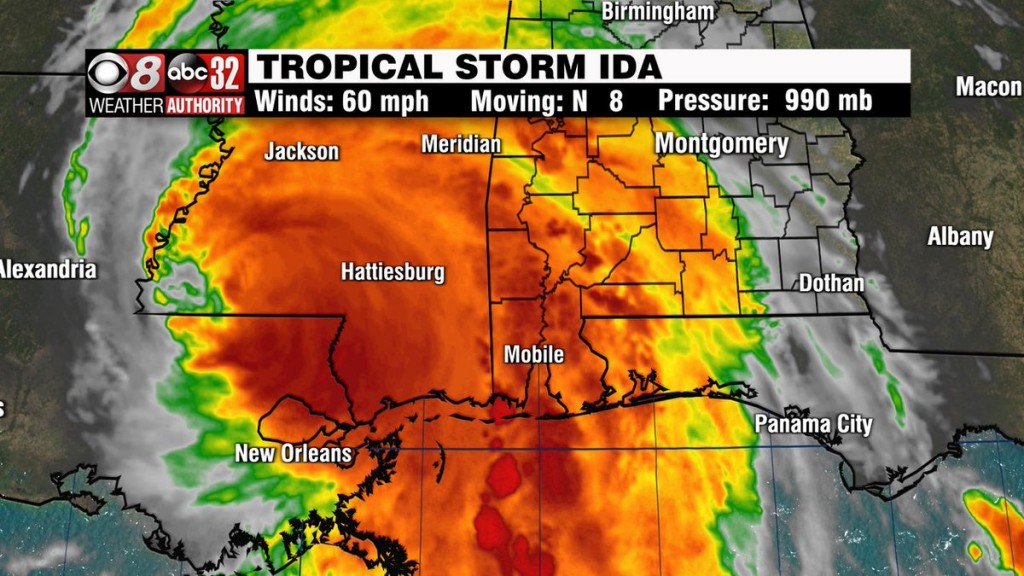 EARLY MORNING UPDATE ON IDA: The center of Tropical Storm Ida was located by NOAA Doppler weather radars, satellite data, and surface observations near latitude 31.0 North, longitude 90.8 West. Ida is moving toward the north near 8 mph, and this general motion is forecast to continue today. A faster northeastward motion is expected to begin by tonight and continue on Tuesday. On the forecast track, the center of Ida will move farther inland over southeastern Louisiana early this morning and move into southwestern Mississippi later this morning. Ida is then forecast to move over central and northeastern Mississippi this afternoon and tonight, and move across the Tennessee Valley on Tuesday. 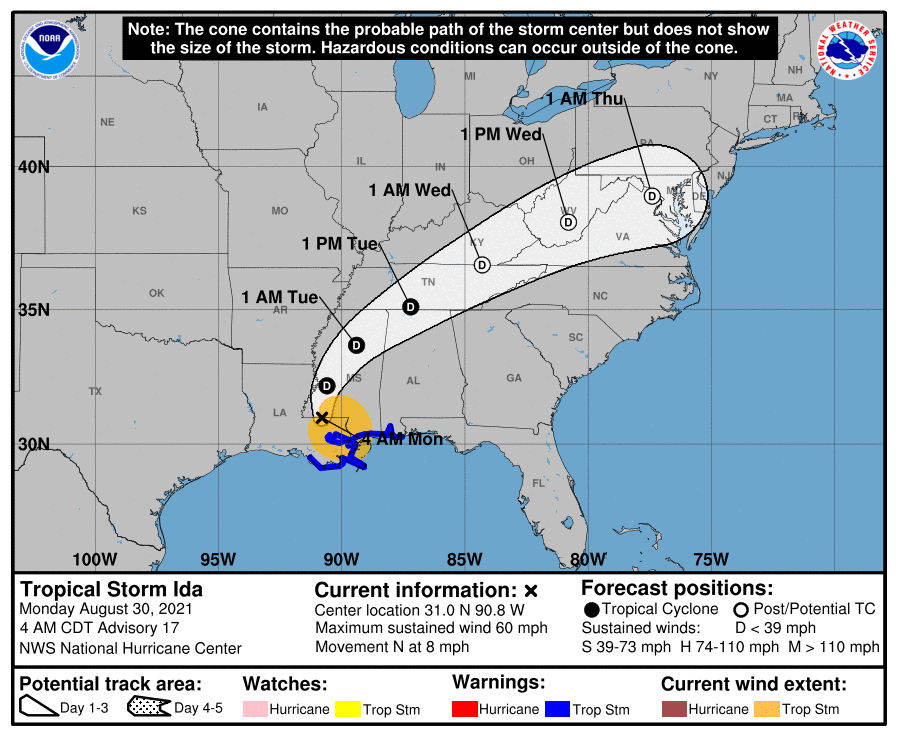 ALABAMA IMPACTS: As the system begins to move northeast, the impacts on Alabama will be increasing in the form of tornadoes and torrential rainfall. Rain bands will begin to overspread Alabama this morning and will continue to do so tonight and tomorrow. The rain bands will have to monitored carefully because a lot of times, there are embedded tornadoes. Tropical tornadoes are typically quick to spin-up and last just a few minutes, but are still very dangerous. This threat for tornadoes is why the the SPC has highlighted all of Alabama in a severe weather threat today with the Level 2/5 “slight risk” for areas of West, Southwest, and South Alabama, including Selma, Camden, Demopolis, Troy, Greenville, Monroeville, Grove Hill, Andalusia, Opp, and Mobile. This severe weather outlook is valid from 7AM Monday morning through 7AM Tuesday morning, so that means the threat for tornadoes will persist into the overnight hours. 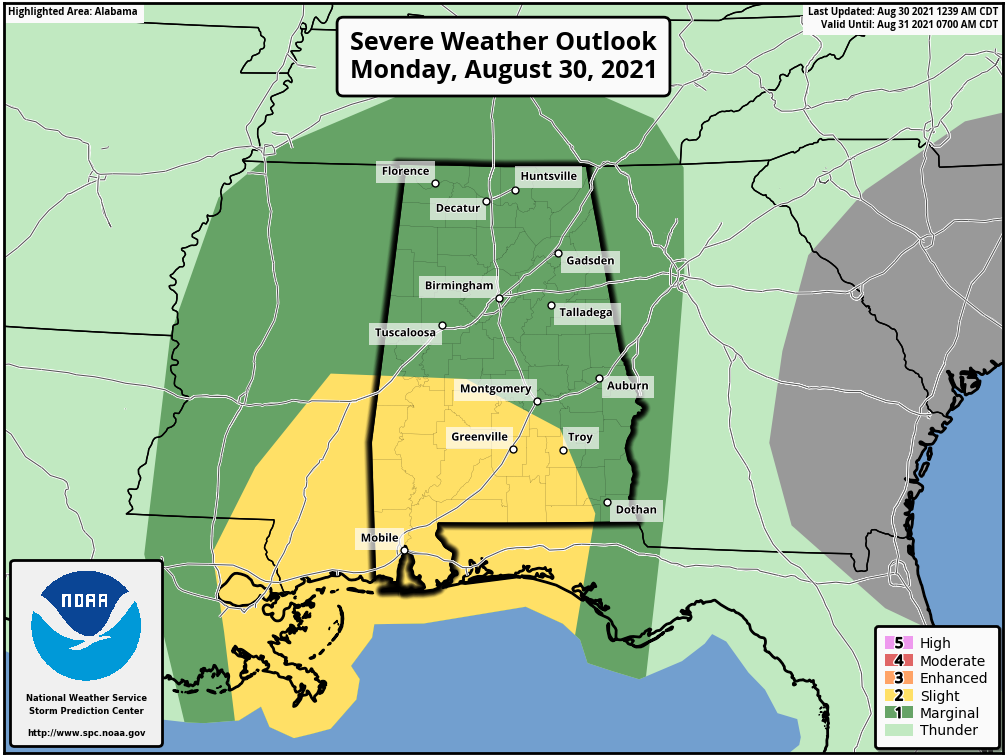 As we move into Tuesday, the threat shifts east, but still a lot of Alabama is included in the threat again, with the Level 2/5 again for much of our viewing area, including Montgomery, Troy, Alex City, Auburn, Dothan, Ozark, Greenville, and Opp. 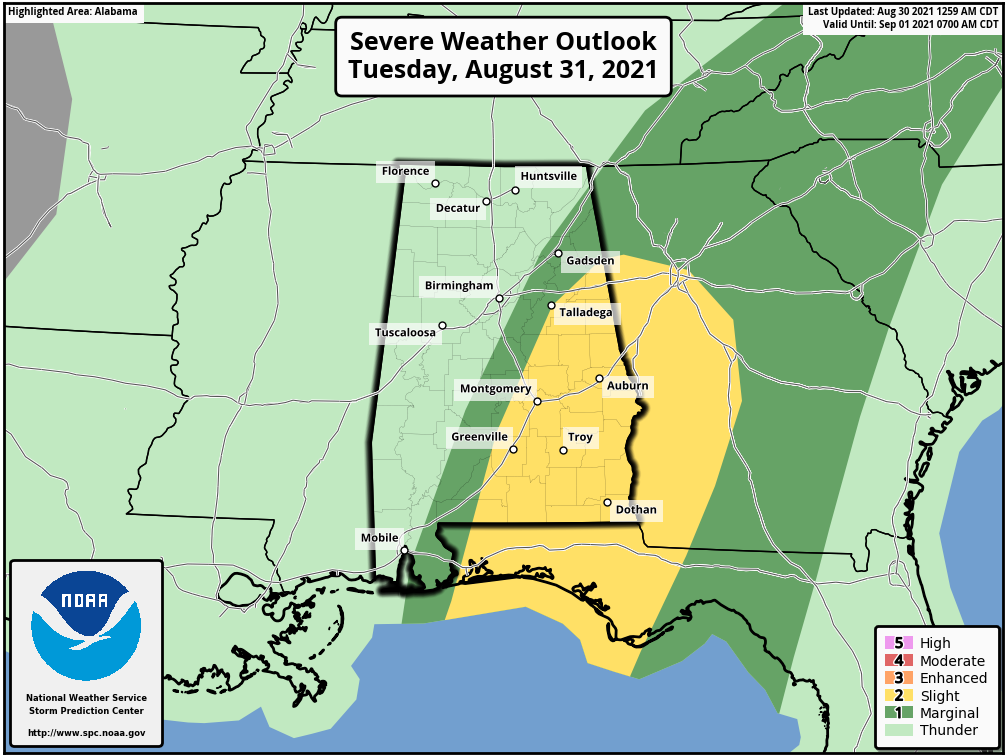 Again, don’t focus on the lines or colors on the map so much, but just know that the threat is there at anytime and anywhere. Again with tropical tornadoes, there is usually very little warning, so it is extremely important for you to stay weather aware until this threat is over. Make sure you have multiple reliable ways to receive severe weather alerts including a NOAA Weather Radio and of course the Alabama News Network Weather App. It features those great push notifications and you can stream our severe weather coverage on your device if you lose power. 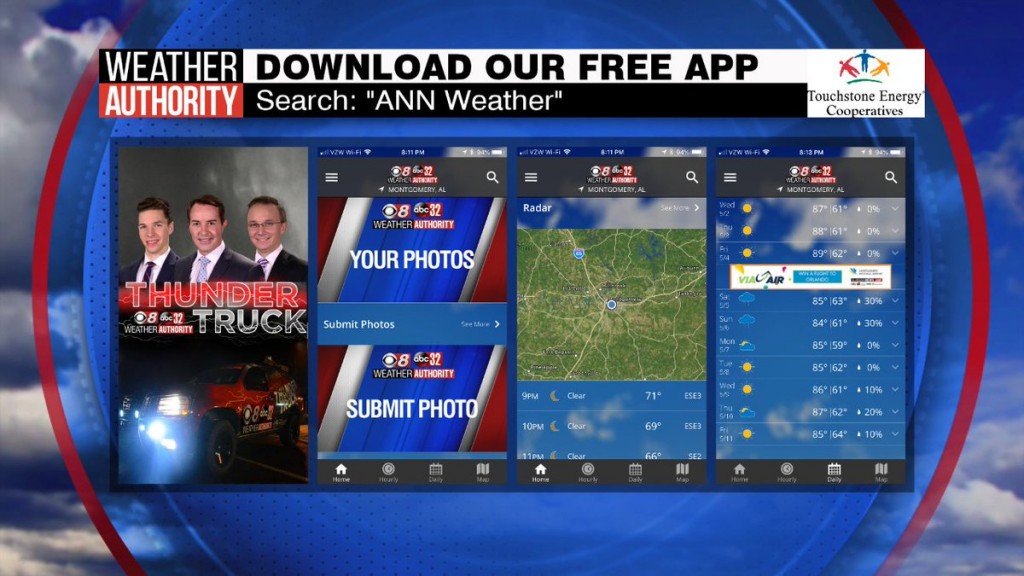 Heavy rainfall will be a growing concern as the system moves east as well. Rainfall totals for much of Alabama look to be in the 2-6 inch range, with the heavier amounts across West Alabama. Here is one models output of potential rainfall, of course this is not what will exactly happen, but it gives you a general idea that things are going to be wet. 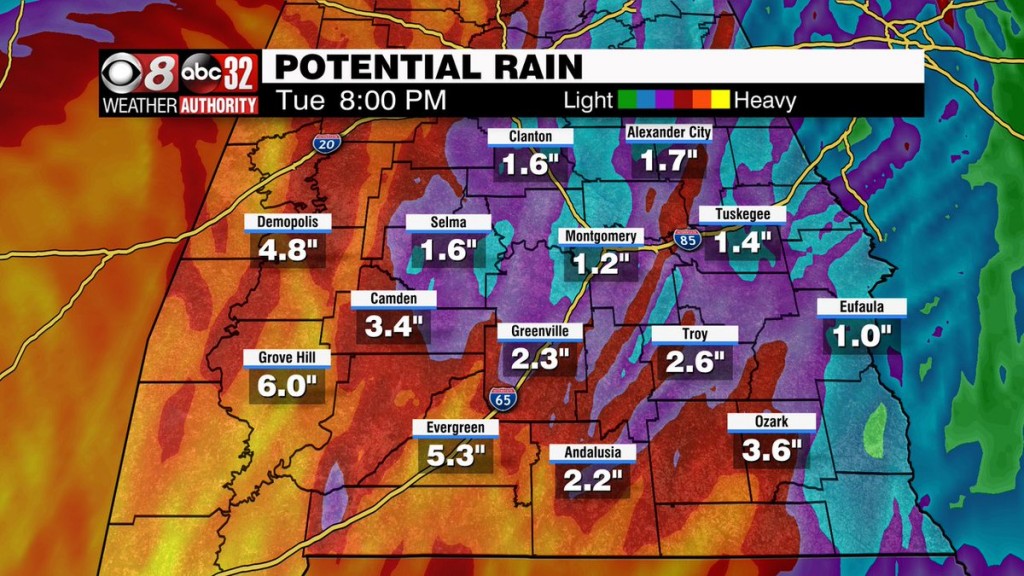 With this threat for tropical downpours, it will not take much for areas of flooding to occur, and the Flash Flood Watch remains in effect and has actually be expanded east to the Alabama/Georgia state line. 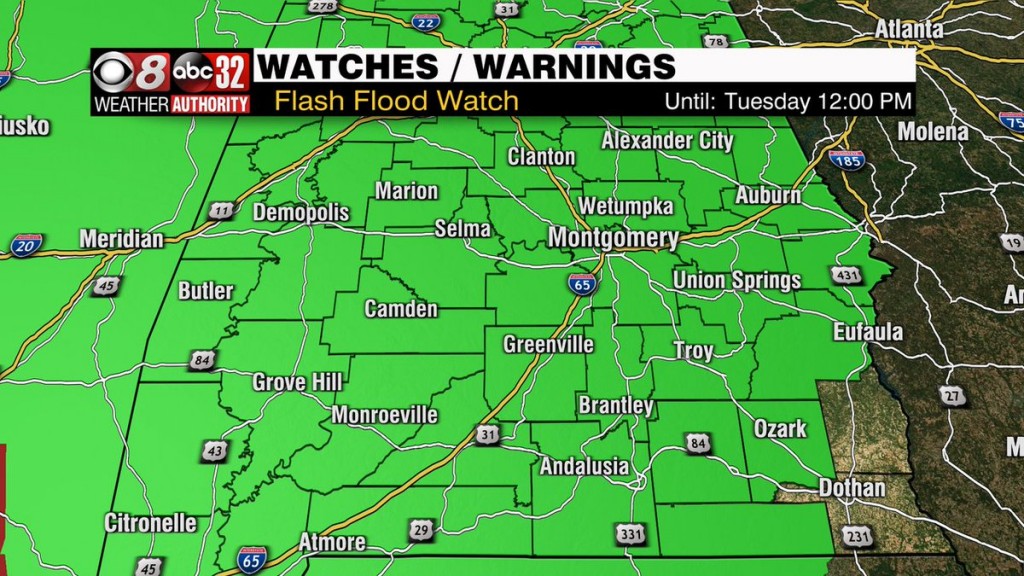 We are going to have to deal with breezy conditions at times as well with sustained winds in the 15-25 mph, but there could be higher gusts, especially in the rain bands, a Wind Advisory is in effect for much of Alabama as well.

So for the most part, here are the main impacts we expect here locally in Central and South Alabama from the prolonged threat of of tornadoes and heavy rainfall. 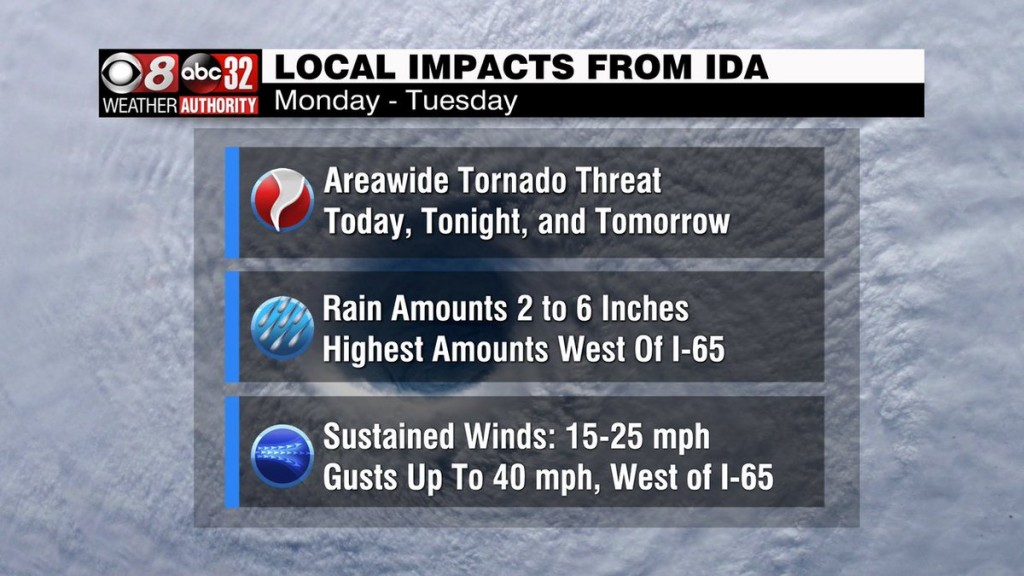 Again remain weather aware the next 24-36 hours as the weather will be very active across the state. By Wednesday the weather will begin to improve and by the end of the week and Labor Day weekend, the weather looks amazing with tons of sunshine, lower humidity, highs near 90° and lows into the 60s.

Be safe and we will have frequent updates on air, online, and on social media until the threat is over.
Ryan