The Alabama Crimson Tide football team is known for it’s winning tradition. And for having one of college football’s most enthusiastic fan base.

Tonight — we’ll introduce to one of those fans — and share his amazing gift.

With a storied history that includes 18 national championships — clearly the Alabama Crimson Tide football team has played in some memorable games. 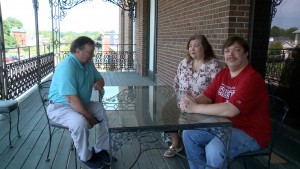 Seth Williams of Valley Grande is a die-hard Bama fan — who can remember more about them — than most. He can tell you the scores and opponents — for every Alabama football game — for the past 20 years.

He can do it for a random specific game.

Williams is on the autism spectrum.

And as a result — he has a memory — like elephant. It’s like a super-power — that he only uses for good. Like raising people’s awareness about autism.

“We want to educate people that autism is something that people, you know, it’s not a terrible diagnosis like some people think,” said Lisa Williams.

“I believe that this is a gift from God,” said Seth Williams.

“I believe God’s gifted me with this. And I believe it’s for a purpose and a reason.”

The Alabama Crimson Tide is set to kick off the 2012 football season Saturday in Atlanta — against the Miami Hurricanes.