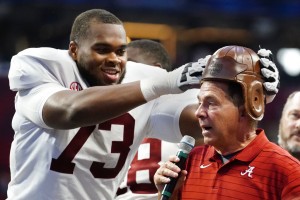 Top-ranked Alabama looks very much like a team capable of making another run at a national title.

Bryce Young became the first Crimson Tide quarterback to throw four TD passes in his starting debut, leading a 44-13 rout of No. 14 Miami.

Young finished off the Hurricanes with a 94-yard touchdown pass to transfer Jameson Williams early in the third quarter.

The Tide defense also turned in a stellar performance. Alabama sacked D’Eriq King four times, forced three turnovers and came up with a goal-line stand that snuffed out Miami’s last gasp at making a game of it.