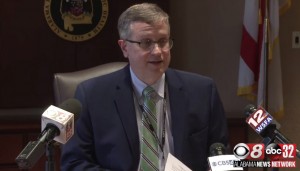 Alabama State Health Officer Dr. Scott Harris says that COVID-19 cases among the state’s school-age children are up 605% from the same week a year ago, when many school systems were virtual.

At a news conference this morning in Montgomery, Harris says there are at least 8,400 students with COVID-19. That is data from 138 out of the state’s 143 school systems that have reported to the Alabama Department of Public Health.

Harris said that according to State School Supt. Eric Mackey, about 90% of Alabama’s public schools require face masks. While Harris acknowledges the debate over masks, he says they are easiest way to slow the spread of the virus. He recommends masks as the best way to keep children in schools for face-to-face learning, which he says is important.

Harris says that while Alabama’s hospitalization numbers are not great, he says there is a bit of a plateau. As of Thursday, there were 2,667 people in Alabama hospitals with COVID-19. He says that’s the first time the number has been below 2,700 in a couple of weeks.

The shortage of ICU beds is still a significant issue, he says. As of Thursday, the state had a shortage of 60 ICU beds. Harris says that hospitals are converting other spaces to accommodate these patients.

As for COVID-19 deaths, Harris says the numbers have been in the double digits each day for about a month. As of April 1, he says there have been 145 deaths among those fully vaccinated. He says 90% of deaths involve the unvaccinated.

Currently, Alabama has 2.36 million eligible people who have received at least one dose of the vaccine and 1.85 million who are fully vaccinated.