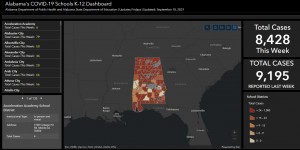 The Alabama Department of Public Health has released a new COVID-19 school dashboard. It shows a drop in cases among the school systems that have reported to the state.

The dashboard for September 10 shows 8,428 cases in schools, compared to 9,195 the week before. The dashboard doesn’t say whether the cases involve students, teachers or other school employees.

Several systems in our areas show drops in week-to-week numbers. While Autauga County and Elmore County don’t appear on this week’s dashboard, they have released their own numbers. In Autauga County, cases have dropped from 298 to 164.

Montgomery Public Schools rose from 209 to 251.

Pike Road Schools did not have numbers on the state dashboard last week. This week, it reports 63 cases.

Despite the drop in some of the numbers, State Health Officer Dr. Scott Harris says cases involving Alabama’s school-age children have risen 605% from the same week last year, when many school systems were virtual.