No 1 Alabama Routs Mercer 48-14, but Coach Nick Saban Says There’s Work to Do 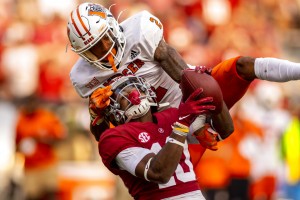 Alabama wide receiver JoJo Earle (10) pulls down a long pass from quarterback Paul Tyson (17) as Mercer defensive back Yahsyn McKee (2) tries to break up the play during the second half of an NCAA college football game, Saturday, Sept. 11, 2021, in Tuscaloosa, Ala. (AP Photo/Vasha Hunt)

The Crimson Tide started sluggishly on offense in what amounted to a warmup game before the Southeastern Conference opener at No. 13 Florida, but potentially more notably had star linebacker Will Anderson Jr. leave with an apparent right leg injury.

Special teams struck before Young and the offense. Chris Braswell blocked a punt, which McClellan scooped up for a 33-yard touchdown and the expected rout was on against the Bears.

Alabama Coach Nick Saban was clearly not happy with his team’s intensity, especially when asked about the offense at the start of the game.

”Well, what’d you think? I mean, it’s kind of a loaded question, isn’t it?” Saban said. ”I mean, if it stinks it stinks. It smells bad for everybody. Smell bad for you? Yeah. What do you want me to do, make excuses for them?”