Wet is the Word; Soon To Be Odette and Peter???

WET PATTERN AHEAD: Deep tropical moisture is in place across Alabama and will remain in place through the weekend, meaning rain will be the highlight our forecast. For today, the sky will be cloudy with widespread rains, highs this afternoon will be on either side of 80° for most locations. This afternoon, we will have some embedded storms mixed in as well.

TOMORROW THROUGH THE WEEKEND: The tropical air mass will remain in place, so it will remain mainly cloudy with scattered to numerous showers and thunderstorms on a daily basis. Rain is possible at anytime, but the greatest coverage will most likely come from noon to midnight. A good chance temperatures will hold in the 70s again Thursday, but should at least make it to the low 80s Friday through Sunday. Rainfall totals over the next several days will be in the 1-3 inch range for many locations, with some higher amounts likely.

IN THE TROPICS: We are likely to have Odette and Peter sooner than later. 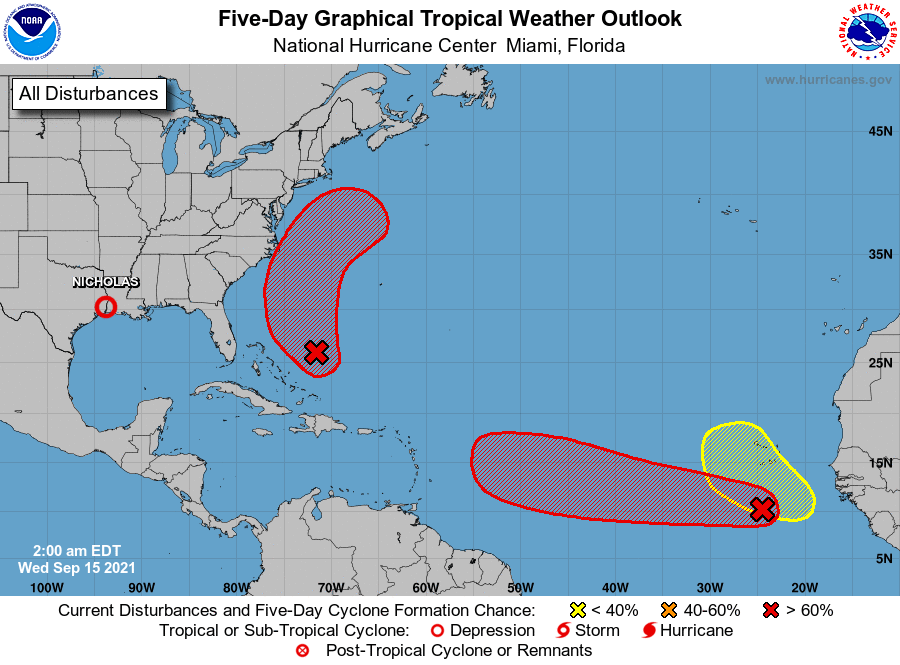 1. Showers and thunderstorms associated with a low pressure area located a few hundred miles south of the Cabo Verde Islands continue to show signs of organization. Environmental conditions are expected to remain conducive for development, and a tropical depression is likely to form during the next couple of days while the system moves generally westward at about 15 mph across the eastern tropical Atlantic Ocean. Formation chance through 5 days…high…90 percent.

2. A trough of low pressure located a few hundred miles northeast of the central Bahamas is producing a large area of disorganized showers and thunderstorms. Environmental conditions appear marginally conducive for gradual development during the next few days, and a tropical depression is likely to form while the system moves north-northwestward to northward across the western Atlantic. Formation chance through 5 days…high…70 percent.

3. A tropical wave is expected to emerge off of the west coast of Africa toward the end of the week. Thereafter, environmental conditions are forecast to be conducive for development while the system moves generally west-northwestward to northwestward over the far eastern Atlantic. Formation chance through 5 days…low…20 percent.

NEXT WEEK: Moist air remains in place… for now we expect a mix of sun and clouds each day with the continued chance of scattered showers and thunderstorms, especially during the afternoon and evening hours.

Warm And Humid With Rain And Storms Tuesday