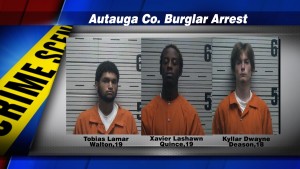 The Autauga Co. Sheriffs Office says they have arrested three suspects in a string of weekend burglaries in Prattville.

When deputies arrived they noticed the window and door were smashed out.

Deputies called for investigators and key holder to respond to 82 Market and Deli.

While on the scene of the attempted burglary, Deputies were dispatched to Posey Crossroads Store on County Road 57.

A passerby witnessed 2 subjects fleeing on foot from Posey’s Store and being picked up by what appeared to be a Nissan Altima type vehicle and called in the suspicious activity to 911.

When deputies arrived they found Posey Crossroads Store with a smashed door and signs of another attempted burglary.

Video was obtained from both stores security systems.

After profiling the video surveillance that was captured from the businesses on Central Alabama CrimeStoppers and on the Autauga County Sheriff’s Office Facebook page, leads and tips from citizens revealed the identities of the suspects sought for these burglaries.

On Wednesday, September 15, 2021, all suspects were located, arrested and charged with two (2) counts of Burglary 3rd Degree and are being held at the Autauga County Metro Jail under a $30,000 bond.  Further charges are pending.