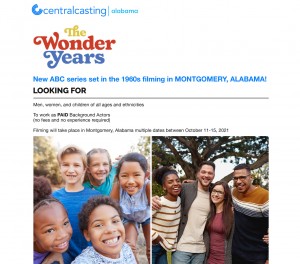 Casting call for “The Wonder Years”

The new ABC show “The Wonder Years” will be filming scenes in Montgomery and is looking for extras to appear on national TV.

As we have reported, ABC is rebooting its hit series “The Wonder Years” this fall. It will feature a Black family living in Montgomery during the late 1960s.

Producers are now looking for men, women and children of all ages and ethnicities to appear as extras. They will be shooting scenes in Montgomery from October 11-15.

Extras will be paid and need no experience. A COVID-19 vaccine is required, although exceptions may be made for those with disabilities or religious beliefs.

Just like the original series that ran from 1988-1993, the show will look at life through the point of view of a boy who is coming of age. This time, it will be 12-year-old Dean, who is growing up with his middle-class family.