Another cloudy, wet day is underway across Alabama as the remnants of Nicholas continue to spread deep tropical moisture over the state. Due to the clouds and rain, temperatures will not make it out of the 70s for much of Alabama again today. We can’t rule out a few rumbles of thunder this afternoon as well.

TOMORROW THROUGH THE WEEKEND: The tropical air mass will remain in place, so it will remain mainly cloudy with numerous showers remaining in the forecast each day. Rain is possible at anytime, but the greatest coverage will occur during the afternoon and evening hours. Highs tomorrow through Sunday should be in the low 80s.

FOOTBALL WEATHER: For the high school games Friday night, the sky will be mostly cloudy, and showers are in the forecast at many stadiums. Temperatures will fall slowly through the mid to upper 70s during the games.

ALABAMA AT FLORIDA (2:30p CT kickoff): It will be a warm, humid day in Gainesville. The sun will be out at times, but there is a pretty good chance of a few passing showers or thunderstorms during the game (take the rain gear)… temperatures will fall from near 84 at kickoff, into the low 80s by the fourth quarter.

AUBURN AT PENN STATE (6:30p CT kickoff): A passing shower can’t be ruled out during the game in State College (especially the first half), otherwise mostly fair with temperatures falling from around 80 at kickoff, into the low 70s by the final whistle.

TROY AT SOUTHERN MISS (6:00p CT kickoff): A few showers are likely during the first half of the game, otherwise it will be a warm, humid night in Hattiesburg with temperatures falling from the low 80s into the upper 70s.

NEXT WEEK: Moist air remains in place…for now we expect a more clouds than sun each day with the continued chance of scattered showers and thunderstorms, especially during the afternoon and evening hours. Highs should be in the mid 80s, which is pretty close to where they should be this time of year. Towards the end of the week, the global models suggest we will finally see some drier weather return to Alabama.

IN THE TROPICS: Waiting and watching for what should become Odette and Peter in the coming days. 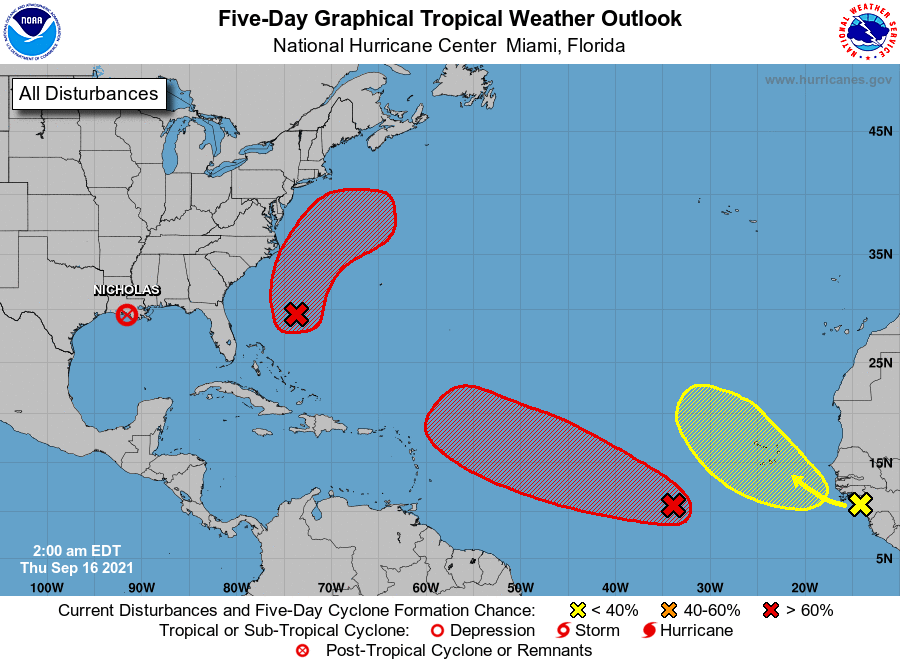 1. Showers and thunderstorms have changed little in organization in association with an area of low pressure located more than 500 miles west-southwest of the Cabo Verde Islands. In addition, earlier satellite derived winds indicated the system also lacks a well-defined center. However, environmental conditions are still expected to remain conducive for development, and a tropical depression is likely to form during the next couple of days. This system is expected to move westward to west-northwestward across the tropical Atlantic during the next several days. Formation chance through 5 days…high…90 percent.

2. Shower activity remains poorly organized in association with a broad low pressure system located several hundred miles to the south-southeast of the Outer Banks of North Carolina. Environmental conditions are expected to become more conducive for development, and a tropical depression is still likely to form during the next day or two while the system moves north-northwestward to northward off the southeast U.S. coast. Regardless of development, this system could bring high surf to portions of the southeast and mid-Atlantic U.S. coasts later this week. Formation chance through 5 days…high…70 percent.

3. A tropical wave located just inland over Africa is expected to emerge off the west coast of Africa in the next day or so. Thereafter, environmental conditions are forecast to be somewhat conducive for additional development while the system moves west-northwestward to northwestward over the far eastern Atlantic. Formation chance through 5 days…low…20 percent.

Stay dry if you can!!!
Ryan

Showers Ahead For Late Week