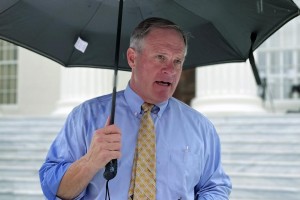 James, the son of former Gov. Fob James, said he will decide by the end of the year. Taking on a well-funded incumbent is typically an uphill battle in a primary, but his entry into the race could thwart the governor’s hopes of having only minimal opposition in 2022.

“I don’t have to tell you that many problems exist today in America, but they are pale compared to what this nation will look like if we lose this cultural war and America becomes a secular godless nation flowing to and fro in the wind with no plumb line, no principles,” James said.

He criticized newly passed Alabama legislation that allowed students to do yoga in schools. “They took prayer out of schools and then they put in this Trojan horse called yoga,” he said, noting its ties to Hinduism. The elder James had fought legal battles a governor over school prayer.

Ivey’s campaign zeroed in on his yoga comments when asked about James’ possible entry into the race.

“We appreciate his unwavering commitment to the important fight on yoga. As for Governor Ivey, she doesn’t do any yoga,” Ivey’s campaign joked in a statement.

Ivey this spring signed legislation reversing a decades-old ban on yoga in public schools. The legislation had a number of restrictions and forbids religious teachings with yoga and saying the greeting “namaste.”

Rep. Jeremy Grey, the sponsor of the legislation, has said the exercises can boost physical and mental and the bill is written to forbid teaching religion.

James largely declined to comment on Ivey on Wednesday, saying that was a subject for another day. In July, he criticized Ivey’s comments saying unvaccinated people were to blame for a spike in COVID-19 case. James said Ivey’s comment was “off base.”

James ran for governor in 2002 and 2010, when he narrowly missed making the GOP runoff, finishing about 200 votes behind the eventual winner, Robert Bentley, who was elected governor that year.

“Look, I’ve lost. It didn’t kill me. But I think if we do it, I think I’ll win it,” James replied when asked about the difficulty of taking on an incumbent.

Fob James turned 87 Wednesday. Tim James said his parents now live in Miami. His mother Bobbie James is in a nursing facility there, and his father lives in a nearby independent-living apartment in order to stay with her. James said his father is doing well.

“He watches FOX News, just stays on top of everything. He loved Trump,” he said.