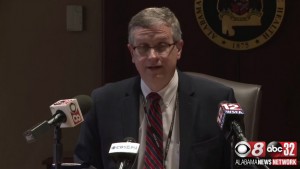 Harris believes that is the first time in state history that’s ever happened. He says it could happen again in 2021. He says the state is literally shrinking.

Harris notes that hospitalization numbers have declined in recent days, which is good, but he acknowledges that in some cases, the numbers are dropping because people are dying.

The shortage of ICU beds is also falling, but Harris says there are still no beds available, which is a challenging problem, not just for those with COVID-19, but for those who need critical care due to other factors, like a heart attack or accident.

He explained the federal government’s change in the distribution of monoclonal antibodies, which he described in detail to Alabama News Network on Thursday. This is a product used to treat people who have COVID-19 to prevent them from getting severely ill. The treatment needs to be given within 10 days of a diagnosis to be effective.

He says on Monday, it was announced that health care providers could no longer order the products directly, but would have to go through their state health department. Harris says that has disrupted the supply.

States will be given the antibodies based on the number of cases and hospitalizations. The state will have to report back to the federal government so that it can be verified that the products are being used and not just left on a shelf. If that reporting doesn’t happen, then a state’s allocation will be reduced.

Harris says more than 1.9 million Alabamians are now fully vaccinated, which represents more than 50% of the population who is eligible to receive the shots. He says he’s pleased with that progress, but says the state still has a long way to go.

He says about 36,000 people have received a third dose, but there is no data available on the reason why they got the booster shot.