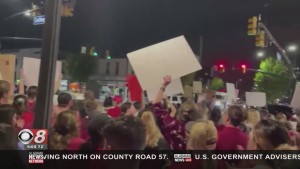 Auburn University plans to hold a town hall on sexual assault following a trio of recent reported cases that prompted a protest by dozens of students and advocates.

Representatives from campus security, student affairs, the Auburn Police Division and other offices will be on hand for the event, which is set for Wednesday.

As Alabama News Network has reported, the allegations led to a protest at Toomer’s Corner on Tuesday that drew more than 100 Auburn students and alumni.

They criticized the assaults and called for more accountability and action by the school.