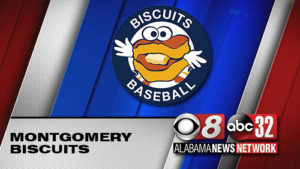 The Montgomery Biscuits will host the Mississippi Braves as the Double-A South playoffs get underway.

The Biscuits (62-55) are in the playoffs after winning six straight games following a seven-game skid that made their playoff hopes look bleak.

Sunday, the regular season-ending doubleheader between the Biscuits and the Birmingham Barons was canceled due to rain at Riverwalk Stadium. The Biscuits were already a half-game ahead of the Barons for the final playoff spot.

The Biscuits will play the Mississippi Braves in a best-of-five series for the Double-A South Championship. Games one and two will be at home on Tuesday and Wednesday nights at 6:35 CDT.

The games will shift to Trustmark Park in Pearl, Mississippi, for the remainder of the series.