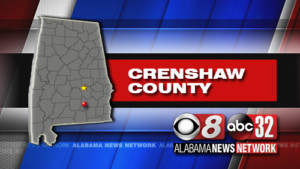 Alabama State Troopers say two people from Montgomery have been killed in a two-car crash in Crenshaw County.

Investigators say 33-year-old Daniel Honoria Garcia Ramirez and 27-year-old Lucia Santis Diaz were killed in the wreck, which happened at about 5:40 a.m. on U.S. Highway 331, about eight miles north of Luverne.

State troopers say the car Ramirez was driving hit another car that was driven by 38-year-old Michael Calixto of Georgiana.

Daytime Shower/Storm Chances Throughout The Week

Plenty of Chances For Rain This Week