Governor Ivey’s plan to address the state’s prison problems includes the purchase of an empty prison near Uniontown.

Perry County Correctional Center has sat vacant for nearly a decade — but it could soon be the property of the state of Alabama. Purchasing the facility is part of the governor’s $1.3 billion dollar plan to fix the on-going prison problems in the state.

“Alabama legislature is about to go into special session to deal with the prison system,” Commissioner Albert Turner, Jr.

“We’re thankful that they are now decided to purchase this prison.” 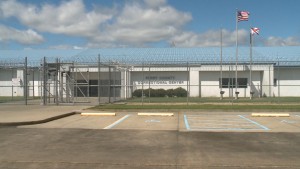 “To use it in a way to maybe, those who are already on parole,” said Alabama Bureau of Pardons and Parole Director Cam Ward.

“So, I think Governor Ivey and her staff have done a great job of coming up with an alternative method to decrease the population of prisons in Alabama.”

The U.S. Department of Justice has sued Alabama over conditions in state prisons. The state is at risk of a federal takeover of it’s prison system — if improvements are not made.

Some of the issues include — overcrowding — under staffing — and violence.

The state legislature will go into special session on Monday.