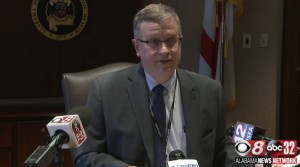 Harris says based on information that came out from the CDC early Friday morning, this is the message he wants to send to all Alabamians:

Dr. Harris says the booster shots don’t yet apply to those who received the Moderna or Johnson & Johnson vaccines, though he is expecting to get information from the federal government soon.

In addition, he says the following groups may also get a booster shot, provided they meet the requirements of #1:

He says there has been no data released on whether people can mix and match different vaccines (like getting a Pfizer booster after receiving the Moderna vaccine.)

Right now, he says 2.4 million Alabamians have received at least one dose of a vaccine while 1.95 million are fully vaccinated. He says the state is no longer at the bottom of the country.

Hospitalization numbers have declined, but he says some of that is due to people dying of COVID-19 and not recovering. He says the deaths remain the final indicator of this spike in cases, lagging behind other statistics, then having to be verified.

Alabama National Guard: Dr. Harris says small National Guard teams will be sent to help at three of the state’s smaller hospitals — located in Troy, Demopolis and Monroeville, in the next few days.

KickCovid19: The state’s program to provide testing and vaccines at selected college football games is going well, Dr. Harris said. He says 683 doses have been given out, mostly at the state’s smaller schools. On Saturday, Sept. 25, the campaign will be at games at the University of Alabama, Auburn University and Samford University, so he expects the numbers to go up.

Schools: Dr. Harris says nothing has changed regarding how Alabama’s public schools should be handling outbreaks. He says the instructions from last year are still in place in terms of reporting cases, getting infected students out of the classroom and notifying parents. Schools are still strongly urged to require masks, keep students at a social distance and tell parents of possible exposure.

Overall, Dr. Harris says it is still not good to mix with people  of other households, especially when vaccination status is not known.