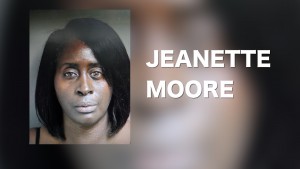 Moore is charged with murder — and tampering with physical evidence.

She’s accused of fatally stabbing her husband — 48 year old Roderick Moore — just over a week ago.

“She’s charged with stabbing her husband in the neck after an argument or some kind of confrontation. She stabbed him in the neck and he bled out as she was taking him to the hospital.”

Jackson says a preliminary hearing has been set for November 2nd.

The murder was the Queen City’s 16th homicide of the year.