REST OF THIS WEEK: Moisture levels are on the rise, so there will be more clouds in the sky, and we will need to mention the chance of a few scattered showers during the afternoon hours. These looks to be mainly across West and South Alabama, and even there they will be few and far between as the chance for rain is around 20%. Highs the rest of the week will be continue to be in the upper 80s to low 90s.

WEEKEND WEATHER: Not much change in the forecast for Saturday with most locations remaining dry with highs in the upper -80s. By Sunday, a few more showers are possible statewide, but again the odds of any one community seeing rain remain low, highs Sunday should be in the upper 80s.

RACE WEEKEND: Saturday will be a partly to mostly sunny, warm day in Talladega with a high in the mid-80s. Then, on Sunday expect a partly sunny sky with just a small risk of a shower; the high will be in the low 80s.

NEXT WEEK: Rain chances look to increase some early in the week as the models are advertising and approaching front that should increase our clouds and showers. Highs should be in the mid-80s.

IN THE TROPICS: The National Hurricane Center is issuing advisories on Hurricane Sam, located several hundred miles east of the northern Leeward
Islands. Also, other features, one of which should become Victor soon. 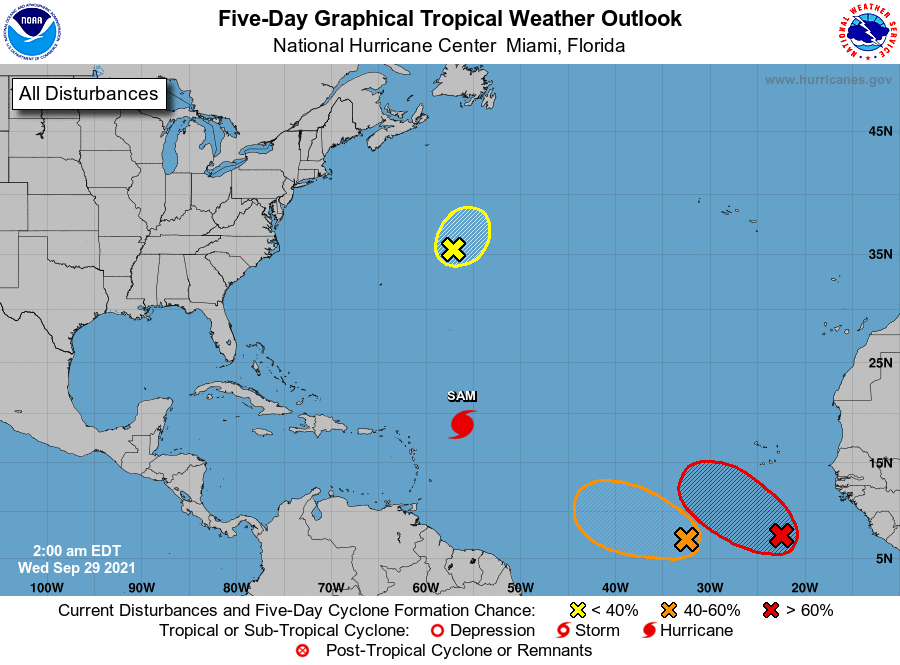 1. Shower and thunderstorm activity associated with an area of low pressure located several hundred miles south of the Cabo Verde Islands continues to gradually become better organized. Environmental conditions are conducive for additional development, and a tropical depression or tropical storm is likely to form later today or tonight while the disturbance moves west-northwestward at 10 to 15 mph over the eastern tropical Atlantic. Formation chance through 48 hours…high…90 percent.

2. Showers and thunderstorms remain disorganized in association with a a broad and elongated area of low pressure located several hundred miles southwest of the Cabo Verde Islands. Although environmental conditions are generally conducive for development during the next day or so, interaction of this system with the low pressure area located to its east is likely to hinder development after that time. The system is forecast to drift west-northwestward over the next few days. Formation chance through 48 hours…medium…50 percent.

3. An area of low pressure associated with the remnants of Peter is located several hundred miles east-northeast of Bermuda. Recent satellite wind data indicate that the circulation of the low has become less defined, and shower activity remains limited. The system is moving northeastward into a region of very strong upper-level winds, and significant development of this system is no longer anticipated. Formation chance through 48 hours…low…10 percent.

HURRICANE SAM: The center of Hurricane Sam was located near latitude 18.9 North, longitude 56.2 West. Sam is moving toward the northwest near 9 mph, and this general motion with an increase in forward speed is expected during the next couple of days. A turn toward the north is forecast by Friday. On the forecast track, Sam will pass well to the east and northeast of the northern Leeward Islands through tonight. 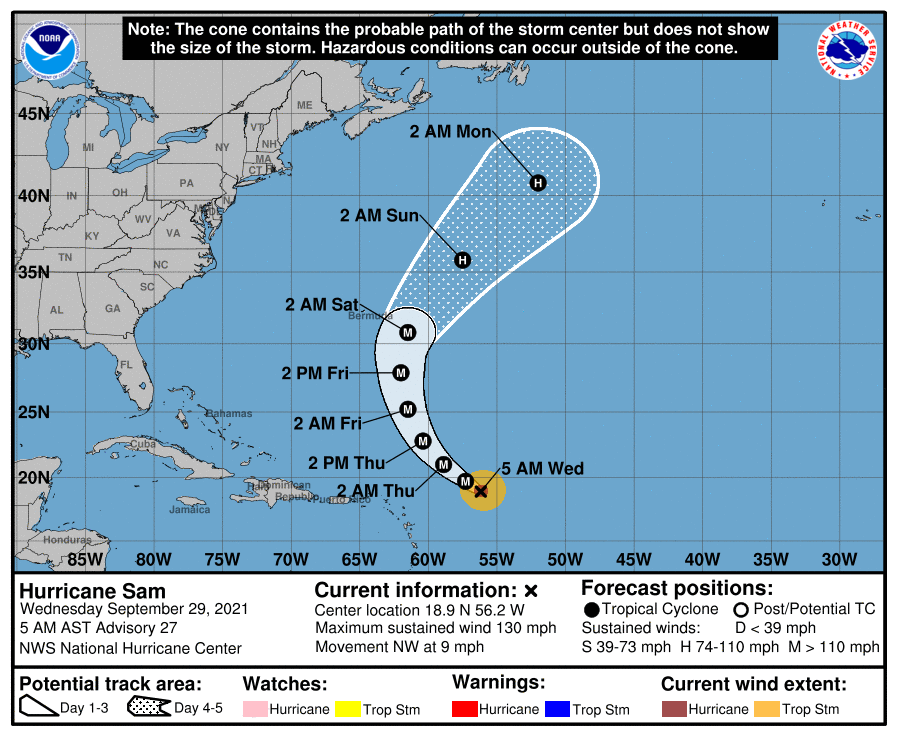 Data from an Air Force Reserve Hurricane Hunter aircraft indicate that the maximum sustained winds are near 130 mph with higher gusts. Sam is a category 4 hurricane on the Saffir-Simpson Hurricane Wind Scale. Some fluctuations in intensity are expected during the next couple of days, but Sam is forecast to remain a major hurricane through late this week. Hurricane-force winds extend outward up to 40 miles from the center and tropical-storm-force winds extend outward up to 125 miles. The latest minimum central pressure estimated from reconnaissance aircraft data is 950 mb (28.06 inches).

Have a wondrous Wednesday!!!
Ryan