NEW DAY, SAME FORECAST: Our Thursday will feature more clouds than sun and we will need to mention the chance of a few scattered showers/storms, especially during the afternoon hours. These looks to be mainly across West and South Alabama, and even there they will be few and far between as the chance for rain is around 20%. Rain chances are higher across Southwest Alabama and along the coast, where rain will be more widespread. Highs today and tomorrow will be in the mid to upper 80s.

FRIDAY AND THE WEEKEND: An upper ridge will keep the state mostly dry and warm Friday and Saturday. Highs will remain in the near 90°, slightly above average for early October. On Sunday, we expect a mix of sun and clouds with just a few widely scattered showers; Sunday’s high will be in the upper 80s.

FOOTBALL WEATHER: The sky will be mostly fair Friday night for the high school games with temperatures falling through the 70s.

OLE MISS AT ALABAMA (2:30p CT kickoff at Bryant-Denny Stadium): Partly to mostly sunny and warm; temperatures falling from near 86 at kickoff, to near 80 by the final whistle.

TROY AT SOUTH CAROLINA (2:30p CT kickoff at Williams-Brice Stadium in Columbia SC): The weather will be warm and dry with a good supply of sunshine. About 88 degrees at kickoff, near 80 by the final whistle.

AUBURN AT LSU (8:00p CT kickoff at Tiger Stadium in Baton Rouge): A passing shower or storm is possible during the first half, otherwise mostly fair with temperatures falling from around 80 at kickoff, into the mid 70s by the fourth quarter.

RACE WEEKEND: Saturday will be a partly to mostly sunny, warm day at Talladega with a high around 85 degrees. Then, on Sunday, expect a mix of sun and clouds with a high in the 80s. A brief shower can’t be ruled out during the race Sunday, but most of the day should be dry.

INTO NEXT WEEK: Rain chances will increase some as a front approaches the area early in the week. Expect scattered showers and storms most day, with highs in the low to mid 80s.

HURRICANE SAM: The eye of Hurricane Sam was located near latitude 21.5 North, longitude 59.1 West. Sam is moving toward the northwest near 12 mph, and this general motion with an increase in forward speed is expected through tonight. A turn toward the north is anticipated by late Friday, and a northeastward motion is forecast to begin on Saturday. On the forecast track, the core of Sam will continue to pass well to the northeast of the northern Leeward Islands this morning, and pass to the east of Bermuda early Saturday. 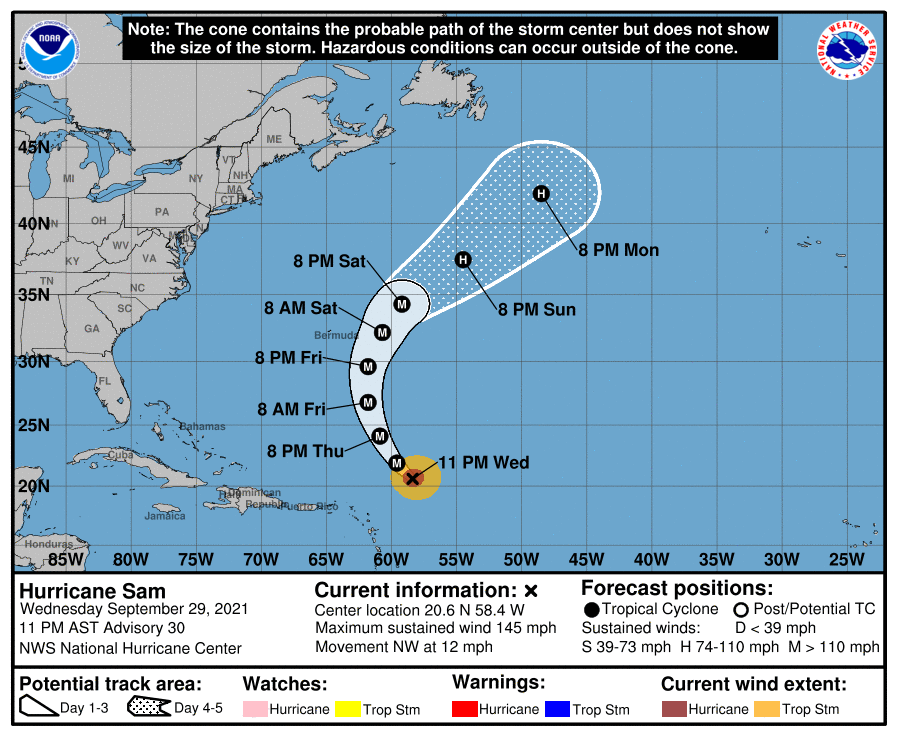 Data from an Air Force Reserve Hurricane Hunter aircraft indicate that the maximum sustained winds are near 145 mph with higher gusts. Sam is a category 4 hurricane on the Saffir-Simpson Hurricane Wind Scale. Some fluctuations in intensity are expected during the next couple of days, but Sam is forecast to remain a major hurricane through Saturday, with more significant weakening anticipated later in the weekend. Hurricane-force winds extend outward up to 60 miles from the center and tropical-storm-force winds extend outward up to 150 miles. NOAA buoy 41044 has recently measured a peak one-minute sustained wind of 78 mph and a gust to 98 mph. The latest minimum central pressure estimated from Air Force Reserve reconnaissance data is 937 mb (27.67 inches).

TROPICAL STORM VICTOR: The center of Tropical Storm Victor was located near latitude 8.7 North, longitude 27.3 West. Victor is moving toward the west-northwest near 13 mph. A west-northwest to northwest motion over the eastern tropical Atlantic is expected through the weekend. 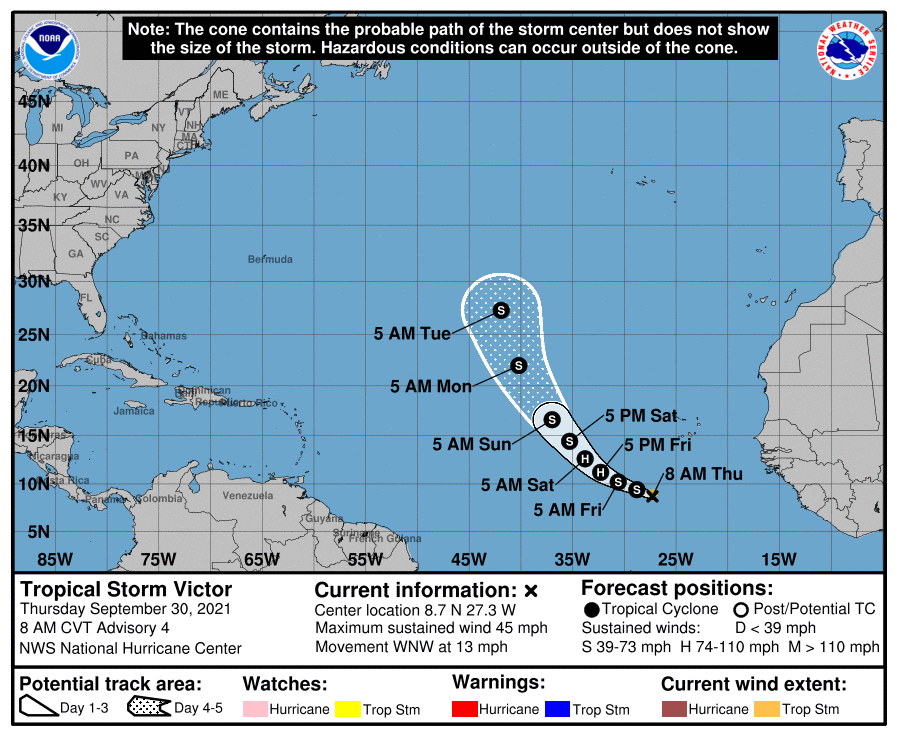 Maximum sustained winds have increased to near 45 mph with higher gusts. Additional strengthening is forecast, and Victor could become a hurricane on Friday. A weakening trend is expected to begin over the weekend. Tropical-storm-force winds extend outward up to 60 miles from the center. The estimated minimum central pressure is 1004 mb (29.65 inches).

Have an amazing Thursday of blessings!!!
Ryan