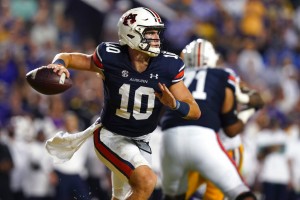 Bo Nix passed for a touchdown and ran for a score and Jarquez Hunter scored on a 1-yard run with 3:11 to give No. 22 Auburn its first lead and a 24-19 victory over LSU on Saturday night.

Auburn had not won at LSU’s Tiger Stadium since 1999.

Bydarrius Knighten’s interception of LSU quarterback Max Johnson on fourth down at the Auburn 39 secured the victory.

Nix frustrated LSU with his feet whether he was scrambling or running by design. He was not sacked and twice converted fourth-down passes during scrambles before finishing 23 of 44 for 255 yards without a turnover.

Auburn will host No. 2 Georgia on Saturday.

(Copyright 2021 The Associated Press. contributed to this report. All rights reserved. This material may not be published, broadcast, rewritten or redistributed without permission.)