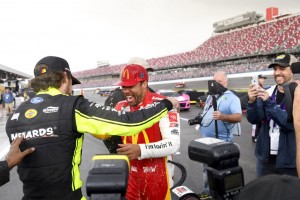 Bubba Wallace, second from left, is congratulated by Ryan Blaney, left, after Wallace was pronounced the winner while on pit row during a rain delay in a NASCAR Cup series auto race Monday, Oct. 4, 2021, in Talladega, Ala. (AP Photo/John Amis)

Bubba Wallace has become the second Black driver to win a NASCAR Cup Series race. He was declared the winner when rain stopped the playoff race at Talladega Superspeedway on Monday.

It is the same track where the FBI investigated a noose found in Wallace’s garage stall last year. The FBI found that the rope tie had been up for months and Wallace was not a victim of a hate crime.

He is the first Black driver to win at NASCAR’s elite Cup level since Wendell Scott in 1963. Wallace drives for a team owned by Denny Hamlin and Michael Jordan.