Big changes — are on the way to the Perry County Sheriff’s Office. And Sheriff Billy Jones says it will improve public safety in the county.

Conditions at the James Hood Detention Facility in Marion — are about to get better.

“Perry County Sheriff’s Office were able to come up with a, with a grant — where we gon’ be able to do a good bit of improvements and upgrades to the Perry County Jail,” Jones said.

“And we’ll have a almost new facility when we get finished with it,” said Commission Chairman Albert Turner, Jr. 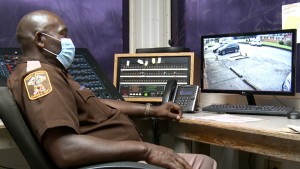 The improvement project will transform some holding cells into COVID cells.

It’ll also include new locks — and a new camera system.

“The cameras that we have here, they been here every since we moved into the jail back in 2006. Also we’ll be doing some upgrades to some of our showers, our control room and our kitchen area,” said Jones.

He says the coming improvements also include a new nurse for the jail. As well as a fully staffed sheriff’s office.

“We are looking to increase the pay so that you can attract good quality law enforcement officers as well as jailers,” said Turner.

“And we should be able to fully staff the jail as well as our sheriff’s department.”

“It’s a great deal for Perry County. It’s a plus for the citizens of Perry County. We will be able to serve them better,” said Jones.

The project is expected to get underway within the next 90 days.

Perry County was awarded a total of $650,000 dollars from a COVID-19 Mitigation grant — and the CARES Act — to pay for the project.