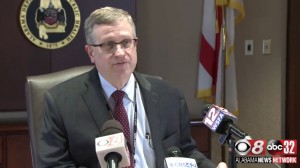 Alabama State Health Officer Dr. Scott Harris says that while COVID-19 hospitalization numbers have been trending down in recent weeks, death statistics have not yet fallen.

Harris gave an update on the effects of the ongoing pandemic at a news conference in Montgomery on Friday morning.

Harris says that hospitalization numbers are about 66% less than they were a month ago. He says deaths are a lagging indicator of the recent spike in Delta variant cases. He says there were 81 COVID-19 deaths on Thursday, and a range of 63-71 deaths in each of the past few days.

Overall, he says 14,756 COVID-19 deaths have been confirmed in Alabama, with others reported that have yet to be confirmed.

He says there is some good news. He says the Delta variant spike is going down, for reasons that he says he doesn’t fully know. But he says in other states and in other countries, Delta has a cycle of about two months, which appears to be the case in Alabama. He says 90%+ of cases in Alabama are of the Delta variant, which is the easiest to transmit.

Harris says the drop in overall cases has led to the current drop in Alabama hospitalization numbers. He says about 8-9% of people infected wind up in the hospital. Monoclonal antibody treatments and increased vaccinations are helping to lower hospitalizations.

He says more than two million Alabamians are now fully vaccinated, which is more than half of the eligible population. However, those who are eligible in the 12-17 age group are the lowest vaccinated group in the state. About 84,000 eligible Alabamians have received a booster.

School-related cases are also on the decline, though Harris says the current 1,199 cases involving schools are up 56% from last year, when many students were learning remotely. He notes that over the next few weeks, several school systems statewide will be having a fall break, which may prevent them from reporting their weekly case numbers to the state.

Looking ahead, Harris says next week, the FDA will discuss Moderna and Johnson & Johnson booster shots and whether they should be made available. He says on October 26, and FDA advisory group is scheduled to speak about whether to make shots available to children ages 5-11.

He urged unvaccinated people to get their first dose next week in order to be fully protected by Thanksgiving. He reminds people that it takes two shots and a two week period after that second shot to be considered fully vaccinated, which means time is running out to be protected by Thanksgiving. He says last year, the holiday marked the beginning of a spike that ran through the holiday season. Vaccines were not yet available at that time.

He also urges everyone to receive a flu shot, so that doesn’t become a second issue in the coming months. Flu season last year was mild. Some say the reason was the use of face masks and social distancing.

Harris says that while everyone has COVID fatigue and is eager to return to normal living, “Now is not the time,” to ditch face masks and other guidelines, with Alabama COVID deaths remaining in the double digits each day.