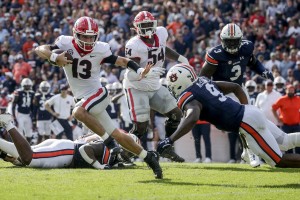 Georgia quarterback Stetson Bennett (13) carries the ball as he tries to get past Auburn linebacker Zakoby McClain (9) during the first half, Saturday, Oct. 9, 2021 in Auburn. (AP Photo/Butch Dill)

Despite taking a 3-0 lead in the opening drive of the Deep South’s Oldest Rivalry, the No. 18 Auburn Tigers were unable to keep up with No. 2 Georgia and Bulldogs quarterback Stetson Bennett.

Bennett passed for 231 yards and two touchdowns and led Georgia past Auburn for the second straight year in a 34-10 victory Saturday.

The nation’s top defense gave up only its second touchdown of the year, who were still without injured starting quarterback JT Daniels. None of that kept Georgia from another comfortable SEC win and a fifth straight in the Deep South’s Oldest Rivalry.

Bennett made his first college start in a Top 10 matchup with Auburn last season.

Auburn quarterback Bo Nix completed 21 of 38 passes for 217 yards and had one interception. One of Auburn’s key players on defense, Smoke Monday, was ejected in the second quarter for targeting as he hit Bennett.

The Tigers are now 4-2 and 1-1 in the SEC. Auburn goes on the road to play at Arkansas next Saturday.