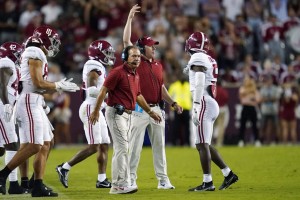 Alabama coach Nick Saban calls to players during a timeout in the first half of an NCAA college football game against Texas A&M on Saturday, Oct. 9, 2021, in College Station, Texas. (AP Photo/Sam Craft)

Several winning streaks have come to an end for Alabama with Saturday night’s last-second loss to Texas A&M.

Going into the game, No. 1 Alabama was 100-0 against unranked opponents and had a 19-game winning streak. In addition, coach Nick Saban was 24-0 against his former assistants, which had included Texas A&M head coach Jimbo Fisher, who worked under Saban at LSU.

Alabama scored 21 straight points, capped by a touchdown reception and 2-point conversion grab by Jameson Williams to take a 38-31 lead with five minutes to go.  Texas A&M tied it at 38 when Zach Calzada connected with Ainias Smith for a 25-yard touchdown strike with three minutes left.

Calzada was hit as he threw the strike and had to be helped off the field but returned for the next drive after a visit to the medical tent. Calzada returned after the Aggies forced a punt to orchestrate the winning drive. The Aggies’ Seth Small made a 28-yard field goal as time expired, to beat Alabama 41-38.

Alabama’s loss will drop the Crimson Tide out of the No. 1 position, to be replaced by No. 2 Georgia, which defeated No. 18 Auburn, 34-10. However, if Alabama wins out, it could still make it to the SEC Championship Game with one loss.

Alabama next plays at unranked Mississippi State next Saturday night.