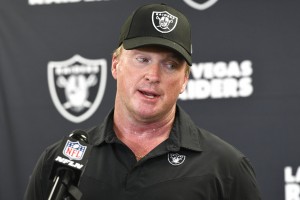 Jon Gruden is out as coach of the Las Vegas Raiders after emails he sent before being hired in 2018 contained racist, homophobic and misogynistic comments.

A person familiar with the decision said Gruden is stepping down after The New York Times reported that Gruden frequently used misogynistic and homophobic language directed at Commissioner Roger Goodell and others in the NFL.

It was a rapid downfall for Gruden, who is in the fourth year of a 10-year, $100 million contract he signed with the Raiders in 2018.

It started on Friday when the Wall Street Journal reported that Gruden used a racist term to describe NFL union chief DeMaurice Smith in a 2011 email to former Washington executive Bruce Allen.