SUMMER-LIKE WEEK: Our Monday will feature more sun than clouds with highs in the mid to upper 80s. A cold front will be approaching from the west late in the day, and could allow for a few more clouds by this evening. The front weakens and eventually dissipates over the area on Tuesday. A few locations may just see a brief shower before that happens, but nearly everyone will remain dry. Highs will be in the 80s. We continue to stay in the mid to upper 80s on Wednesday through Friday with partly to mostly sunny sky.

WEEKEND FRONT: A potent cold front will swing out of the Plains on Friday, approaching Alabama late Friday night. As it moves through the state on Saturday some scattered showers and thunderstorms will be possible, but with limited moisture, this shouldn’t be a big rain producer. Behind the front, fall air returns to Alabama as highs Saturday will be near 80°, followed by a sunny and much more comfortable Sunday with highs in the mid 70s. Morning lows will return to the 50s by Sunday morning. 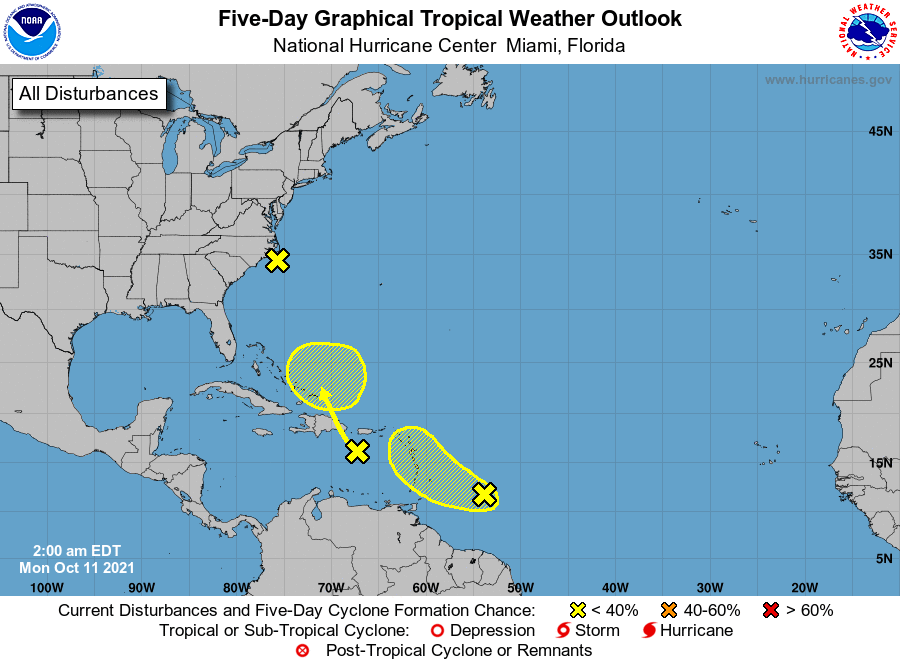 IN THE TROPICS: 1. A non-tropical low pressure area located just off the North Carolina coast continues to produce some disorganized showers and thunderstorms. Although this system is not expected to become a tropical or subtropical cyclone, locally heavy rainfall and gusty winds are still possible over portions of the North Carolina Outer Banks today and information on these hazards can be found in products issued by your local National Weather Service Office. Formation chance through 5 days…low…near 0 percent.

2. A tropical wave located about 400 miles east-southeast of the Windward Islands continues to produce disorganized cloudiness and thunderstorms. Some slow development is possible during the next day or two while the system moves west-northwestward at about 15 mph toward the Lesser Antilles. After that time, strong upper-level winds are expected to limit further development. Regardless of development, the system could produce locally heavy rainfall and gusty winds across portions of the central and northern Lesser Antilles on Tuesday, and across the Virgin Islands and Leeward Islands on Wednesday. Formation chance through 5 days…low…30 percent.

3. Another tropical wave located over the eastern Caribbean Sea is producing a large area of disorganized cloudiness and showers. Unfavorable upper-level winds are expected to limit development over the next day or so, but environmental conditions could become a little more conducive for some gradual development of the system when it is located near the southeastern Bahamas around midweek. Regardless of development, locally heavy rainfall is possible over portions of the Lesser Antilles, Puerto Rico, and Hispaniola during the next couple of days. Formation chance through 5 days…low…20 percent.