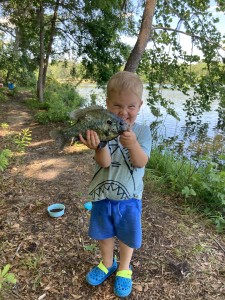 This year’s winners of the Alabama Black Belt Adventures Best Fish Photo Contest are both from Dallas County.

Three-year-old Spur Knight of Valley Grande took home the top prize in the beginners division, while Brandon Sullivan of Tyler won in the experienced angler category.

Spur had his father Chase Knight and his 7-year-old brother Gauge with him when he made his big catch at the dallas County Public Fishing Lake. They noticed tree limbs hanging into the water on the backside of the lake and figured that it would attract fish.

“I tried to help Spur make the perfect cast to get his hook near the structure without getting caught up, but he would have none of it and insisted he go it alone. By the end, you can imagine the number of hooks and corks that were dangling from the limbs – easily 10 to 15. I honestly thought he was hung up again when he started yelling but, sure enough, he made a great cast and did it all by himself, eventually landing a huge shellcracker.”

Spur received almost 1,000 votes during the contest. For his efforts, he won a full day of fishing for two along with one night’s lodging at Triple D Ranch near Emelle in Sumter County. Both Knight brothers can claim bragging rights as Gauge was a previous winner of an ALBBAA best fish photo contest. 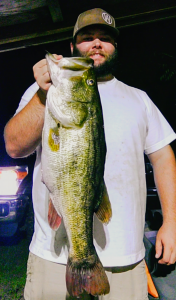 “Having a winner from both a public fishing lake and a private lake speaks to the bountiful fishing opportunities in the Black Belt,” said Pam Swanner, Director of the Alabama Black Belt Adventures Association. “The many water ways and impoundments found in the Black Belt have always had great reputations as abundant fisheries and the privately managed lakes at various outfitters are well maintained for the utmost in customer satisfaction. We’re extremely proud to recognize both an experienced and beginner angler this year and are very grateful to Triple D Ranch’s support and partnership of the contest.”