No. 5 Alabama Hopes for Rebound with Trip to Mississippi State 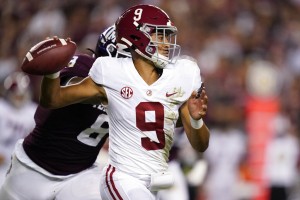 Fifth-ranked Alabama looks to regroup from its 41-38 loss to unranked Texas A&M with a 14th consecutive series win at Mississippi State in SEC play.

The Crimson Tide have won 15 times after a 17 losses since 2008 and not lost consecutive regular season games in that span.

Mississippi State had a bye last week after beating Texas A&M. Quarterback Will Rogers passed for 408 yards and three touchdowns in that game and has 14 TDs through five games. The Bulldogs boast the SEC’s top passing game and have allowed just 18 tackles for loss this season.

The game is at 6PM CDT on ESPN.