‘The Wonder Years’ Took Eastdale Mall Back to the 1960s

You’ve probably seen the filming for ‘”The Wonder Years” around the City of Montgomery for the last few days. 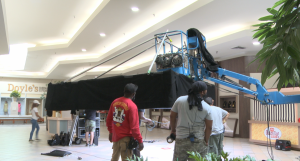 1960s while the show is being filmed. You’ll find several fictiticous storefronts.

This is the third location “The Wonder Years” has filmed at in Montgomery. Crews were in downtown on Wednesday, in front of the Dexter Avenue King Memorial Baptist Church.

The remake of “The Wonder Years” features a Black family living in Montgomery during the late 1960s.

Just like the original series that ran from 1988-1993, the show looks at life through the point of view of a boy who is coming of age. This time, it is 12-year-old Dean, who is growing up with his middle-class family.

The General Manager for Eastdale Mall, Richard Holman, was especially excited about the Eastdale Mall being used for the show, even though the mall wasn’t built until the 1970s.

“It’s really incredible I’ll tell you!” stated Holman. “The truth is that the mall is doing so well, we’re completely full of tenants right now and you can see the excitement of the wonder years fixing to start their filming here and the people are reaching out and the malls packed and we got a great crowd and great traffic so its going extremely well and we’re just thankful for the opportunity for everyone to come out here.”

“The Wonder Years” will be filming at Eastdale Mall October 14th and 15th.